Intro
My third entry to the Game Maker’s Toolkit (GMTK) Game Jam, Abduction on a Budget is a game that tasks the player with guiding a UFO around Earth to go about gathering humans. The problem is that the alien’s abduction system is out of order. To fetch the humans, the aliens dangle one of their own from a long rope. This unfortunate alien and the UFO are connected at all times. Either as a single player controlling both units or playing as a two-player experience, the units need to cooperate to achieve the mission.

Compared to the Last Project
Again, the game jam had a 48 hour time limit to complete a video game. Compared to 2020’s project Meowt of Control, this project was both more ambitious and turned out a better result for the jam build. The team’s focus this time was on shipping a game with a better defined gameplay loop, because Meowt of Control was a confused project in many respects until being fixed months later.

Game Jam Theme
The jam’s theme was ‘Joined Together’. With this brief in mind, our brainstorming steered toward a helicopter with a person attached by rope. Thinking this was somewhat cliché, the idea of an alien invasion came to us. From here, our artists went all-out on a cartoony, fun style for both the visuals and sound/music.

Summary of Development
The programmers, including myself, had some work to do. The basic character controls were simple enough, but having them interact with a rope-like physics object proved challenging. Still, by the submission time the game functioned well outside of a few glitches to do with the rope. The 3 levels designed were created to show the potential of the game mechanic. The team’s cohesion this time was a step above the last project.

Version History
Version 1.0 released for the jam was acceptable, although within a week Version 1.0.1 became available to fix some player control oddities.

To play the game in your browser, visit the itch.io page for the project! There are also downloadable versions for Windows, Mac and Linux available.

To view the source code for this project, take a look at the GitHub repo. 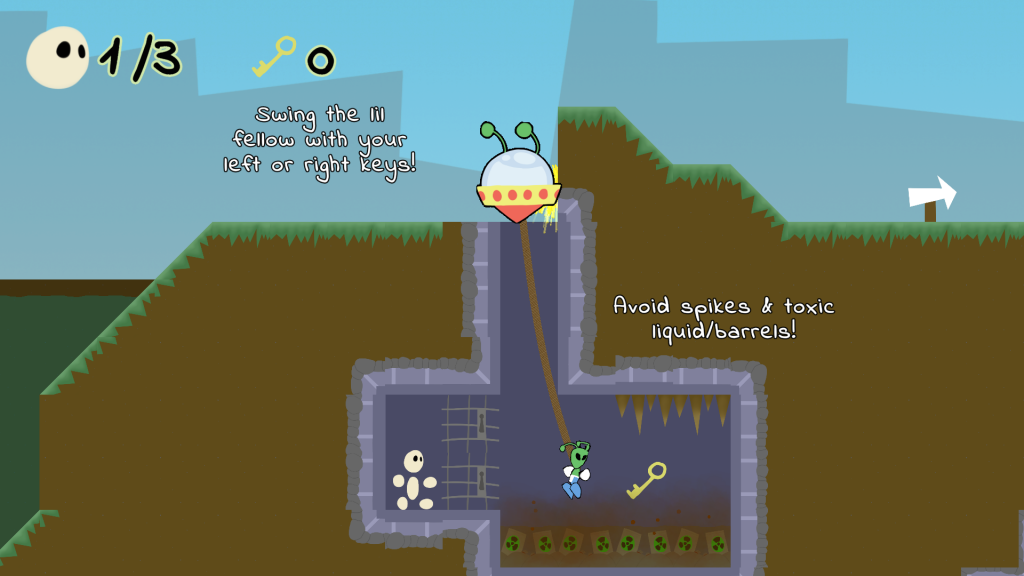 Screen-cap of Abduction on a Budget’s gameplay