As compared to last year’s project for the Game Maker’s Toolkit (GMTK) Game Jam, the one created this year for GMTK Game Jam 2020 was much wider in scope. I worked as part of a team of five over the course of 48 hours to put together a tower-defence and top-down shooter hybrid game.

The game was conceptualised as a tower-defence game where the enemies would leave remains that other enemies would have difficulty passing through. After a few hours of brainstorming and prototyping, the main character was decided to be a cat wielding a laser pistol in its tail. From there, development continued for 48 hours with two members dedicated to art, and three dedicated to code. I was one of the coders.

Version 1.0 released for the jam was incomplete. After a month of development, Version 1.1 became available. This latest patch was mostly worked on by me.

My responsibilities for the project included:
– Creating a blank Unity project with basic systems in place before the game jam
– Code for tower purchasing and placement, other game mechanics
– Most UI design decisions and coding, especially the Help screen
– Proofreading of code, play-testing, final checks before submission
– Refactoring code and refining the game after the jam

More information and download links can be found on the Itch.io page for the project.

The source code for this project is private on GitHub. To see what I put into the project, contact me and I’ll show the commit history.

Note: Thumbnail for this post was designed by TeslaSP2, one of the team’s artists 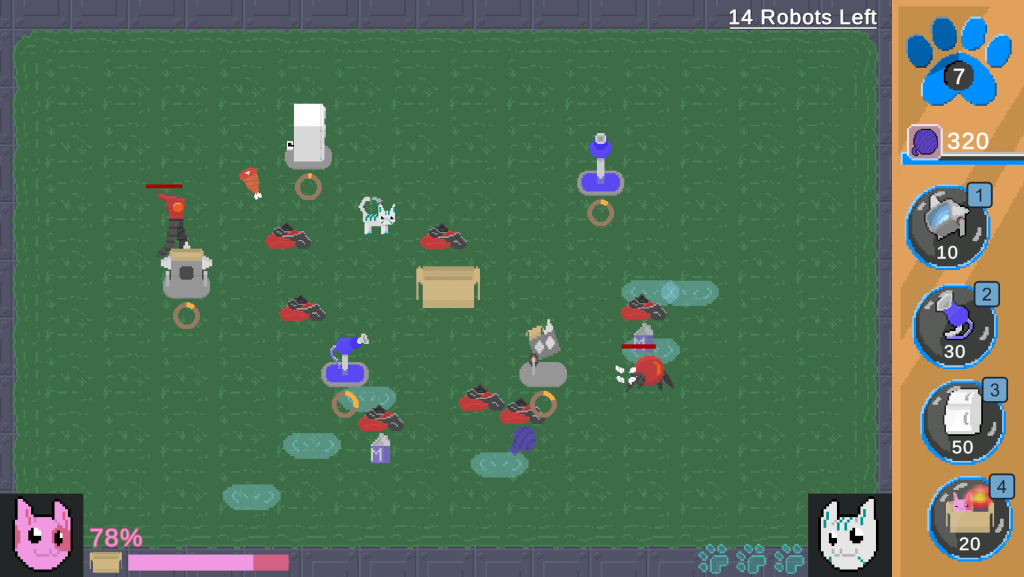 Screencap of Meowt of Control’s gameplay